Summer is in full swing in Switzerland, meaning that we are dusting off our hiking boots and hitting the trails. With the season in some places extending into early Autumn, there’s still plenty of time to plan a walk in Switzerland’s most beautiful scenery. We pick ten of the best hikes near to Le Bijou locations — and remember James is always on hand if you’re looking for something different, or a way to turn a simple hike into a special occasion.

Central Switzerland is a world of mountains, lakes and gently rolling green hills. There is a good mix of hikes, from walks just outside the city, to panorama cliff top treks. 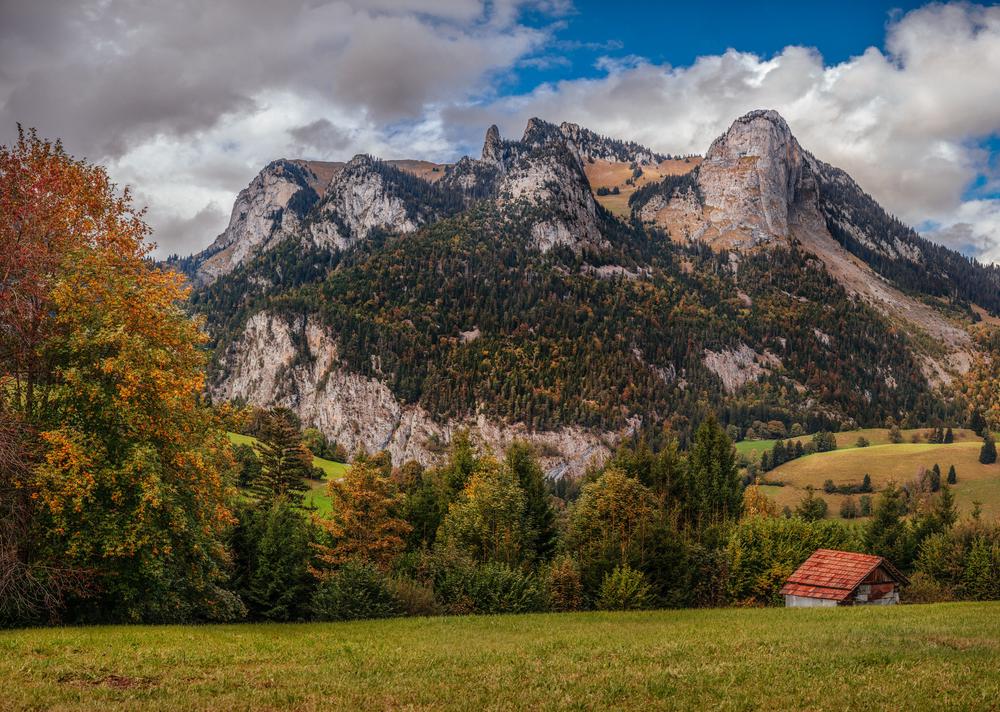 Close to the city, this easy hike is perfect for those who don’t have much time in the area. It is 6km, but only takes around two hours and is pretty straightforward. The route runs from the Uetliberg to the Felsenegg, with views over Lake Zürich. However, the main talking points are the educational solar system installations, which mean that not only are you taking a hike in Zürich but also the universe.

A longer hike, but not too difficult, this route takes in part of the Zürich Oberland High-Alpine Trail. The first leg is walking from the Atzmänzig bus stop to the Chrüzegg Berggasthaus, which is where the real trail kicks off. After that there are a few peaks, but you are heading in a generally downhill direction towards Rapperswill in St Gallen. The hike takes around seven to eight hours, but you will be rewarded with beautiful, constantly changing scenery, and there are one or two huts for a drink and a snack en route.

Easily accessible by public transport from all three cities, this is a popular spot for its picture-postcard views of the Swiss mountain scenery. The hike itself isn’t long — about 5km — but you will need to be of average fitness as some paths are cut into the cliff face and secured with a chain. From the village of Stoos, the cable car takes walkers up to Klingenstock, where you are immediately greeted by a sweeping panorama of lakes, mountains and villages. It’s a clue to what’s in store. As the train winds its way along the ridge, every turn reveals a photo-worthy view that makes all of that effort worthwhile.

Step into Swiss history by following the ‘William Tell’ Path between Rütli and Bauen. Reached by steamboat, the route starts in the Rütli meadow, at the founding point of Switzerland. Heading up the 850 steps to Seelieberg might seem an effort, but it’s well worth it for the stunning views. In fact, this very view was immortalised by painter Charles Giron in a piece that hangs in the parliament in Bern. Meadows, farmland and mountain vistas all feature along the way, which descends down to Bauen. It’s a literal walk through the founding of Switzerland: the 35 km trail represents each canton, with the length of trail dedicated to the canton proportional to the population at the time of building. The order goes on when each joined the Swiss Federation, and there’s plenty of historical information available along the way for anyone interested.

17km of ‘Panorama Trail’ seems to promise some pretty impressive views, and this hike near Zug doesn’t disappoint. It’s a round trip, so you can head in either direction, but most people start at Oberägeri and head via St. Jost and Raten to Gottschalkenberg, before walking through the countryside and onto Menzingen. Expect rolling Alpine meadows and mountain views, mixed with a historic convent and the base of the Bloodhoud guided missile system to add a little variety to this otherwise typically pretty Swiss setting. 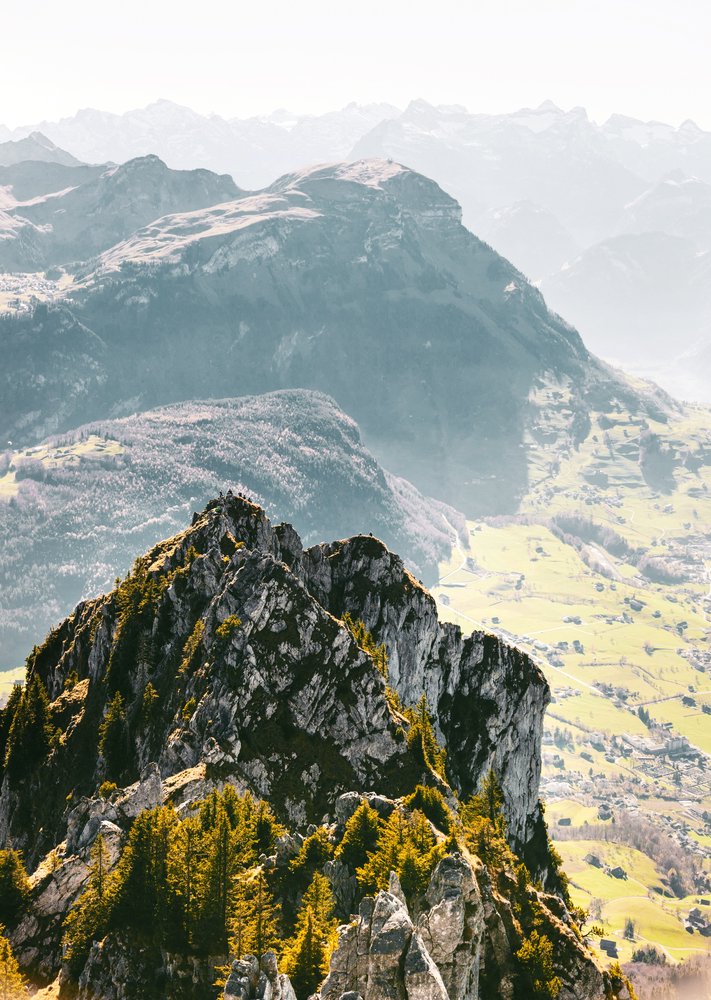 The north-west of Switzerland offers a gentler scenery, winding along the Rhine and crossing over into France and Germany at this crossroads of culture.

This is an easy one to kick of your adventures in the countryside around Basel. Here, deep in the mountains of the Jura, the hills are still gently rolling and green as they unfold in a patchwork panorama. A cable car takes visitors to the top of Wasserfallen, and once you’ve reached the upper station, there are some short and not too strenuous walks through fields and farmland, a rope park, and a small cafe. You can take the cable car down again, but it’s a paved pathway that is easy to walk — or scooter. The top station rents out adult-sized trotinets for those who want to feel the wind in their hair as they whizz down to the base.

Art and architecture fans don’t have to spend the summer indoors with this route between the Fondation Beyeler, in Riehen near to Basel, and the Vitra Campus in Weil Am Rhein, Germany. Start at either end and follow the five kilometre Rehberger-Weg that links the two institutions. The route is named ’24 stops’, after 24 pieces of site-specific sculpture that dot the way. Created by artist Tobias Rehberger, the stops are designed to bridge both art and function, some providing practical uses (rain shelters or telescopes), and others firing the imagination. On certain dates, guided art or history walks are also on offer.

For more of a traditional hike, head to the mountain walk from Langenbruck to the Passwang. At 775 m above sea level, the altitude doesn’t match some of the more mountainous locations in Switzerland, but the cliff top trails, steep wooded pathways and magnificent views still require an average level of fitness. The path goes up Helfenberg, to the summit of Chellenchöpfli, the highest peak in the Basel region, before descending over the Passwang, on the border of the cantons of Basel Landschaft and Solothurn. There are public transport links at either end — although if you’re still feeling particularly fit you could always do it all over again in reverse…

It might be hard to tear yourself away from the sunny lakeside life of Geneva, but if you head out of the city and into the surrounding area, you’ll be rewarded with some excellent hiking.

If you only know Verbier for its ski scene, this is a great way to see what the area looks like without the snow. Lac de Louvie is a mountain lake at 2,213m above sea level, reached by foot from either Verbier or Fionnay. The trail is know as the ‘Sentier Chamois’, and for good reason — if you are lucky you might spot some of these eponymous mountain goats, and even their pals the mighty Ibex, along the route. Even if the fauna doesn’t put in an appearance, the hike offers spectacular views over the surrounding mountains, making it one of the most popular spots in the region and well worth the two hour drive from Geneva.

Spike your hike with a little local tipple along this route that winds through the Lavaux vineyard near Montreux. Start in the medieval town of St. Saphorin, and then follow the undulating trail towards Lutry. The hike roughly follows along the edge of Lake Geneva, and impressive views are the norm around here. And if you want to linger over those view, there are plenty of cellars and taverns along the route serving regional wines. A train or boat will return you to your starting destination -— unless of course you want to do it all over again to sample any bottles you might have missed. 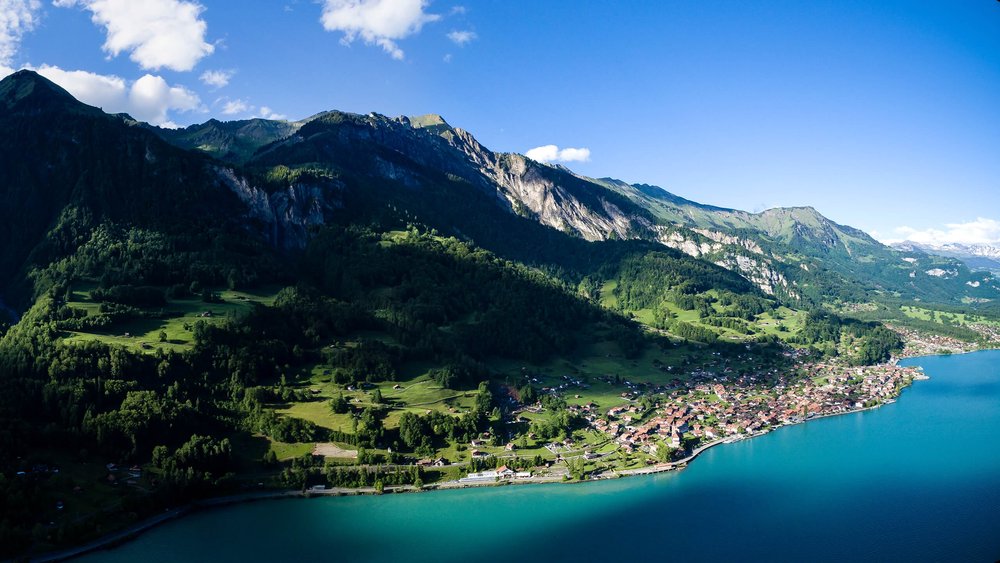 This is Switzerland as you imagined it. Hundreds of hikes wind their way through the quintessential Swiss countryside scenes of the Bernese Oberland.

Starting in the centre of the city, at the BärenPark, this is one of the most easily accessed hikes for those staying in Bern. It follows the 30th stage of the Via Jacobi, part of the famous pilgrim route, Camino de Santiago. The urban section soon gives way to a more pastural view as the route heads up the Niedermuhlern and the Rüeggisberg, through picturesque fields and forest. The route passes several important historical sites, such as the Leuenhohle, a section of pathway cut into the sandstone, and offers great views of the Eiger, Mönch and Jungfrau in the distance. It’s not a particularly difficult trail. but you will need a good level of fitness, not least because it can take seven hours to complete.

If your idea of the perfect Swiss mountain scene includes verdant green pastures dotted with cows and chalets, then this is the hiking area for you. The Oeschinensee is a brilliant blue mountain lake, 1578m above sea level, framed by the steep snow-topped cliffs of the Blümlisalp (‘flower mountain’). There are a selection of hikes around the lake, but one of the most popular starts at Kandersteg, where you can either hike up or take the cable car, before walking the descent.

Keeper of the key