Want an insider look into traditional Swiss culture? Join the crowds at one of the Autumn’s alpine descents, where herds of dairy cattle are brought back down from the mountains to winter in warmer climes.

Cows are revered in countries the world over, but there are few places where they are so intrinsically entwined into traditional national identity as Switzerland. There are cow fights, cows given as pr There are almost 600,000 milk cows in a country of just eight million people (and that’s not counting those reared for beef), cows are given as prizes in traditional sporting events, and there’s even a cow beauty contest (really). These bovine residents are such a part of Swiss culture, that the iconic, green alpine pastures wouldn’t be complete without a herd of Swiss browns gently meandering across them, their bells tinkling as they walk.

In fact, the cows only spend half of the year up in the mountains; between early-September and mid-October, they are brought down to warmer altitudes and the cosy security of the barn. This alpine descent, known as the Désalpes in French, or Alpabzug in Swiss-German, has been going on since 3,000 BC and is steeped in tradition. Herdsmen dressed in traditional dress lead the cows, who have are decorated with floral garlands and wearing their best bells. Some festivals are accompanied by alphorn displays or yodelling, while others coincide with tasty farmers’ markets or other events.

Floral crowns are out in force in Engelberg as Autumn starts to make itself known. But this is no hipster festival… the elaborate and colourful blooms are decorating the heads of Engelberg’s cows, making their way down from the slopes of the Titlis at the end of September. The decorations are symbolic of the changing of the season, a final celebration of the vibrancy of summer before the mountains don their winter whites. The herds arrive at the Viktoriagärtli around 11am, and are accompanied by a regional farmers’ market in the square.

In Appenzell, tradition is at the heart of the alpine descent. At the front of the group are children leading the white, hornless Appenzell goats. Following is the dairy farmer, decked out in the traditional yellow breeches and red jackets of the region, topped of with a black hat adorned with flowers. Behind him come the three ‘bell cows’, who are considered to be the most beautiful in the herd, leading the rest, with farmers and Apenzeller herding dogs keeping everyone in check. Once they reach their destination in Urnäsch, a local festival kicks of, with Apenzeller cheese tasting, farmers’ market and pig races. 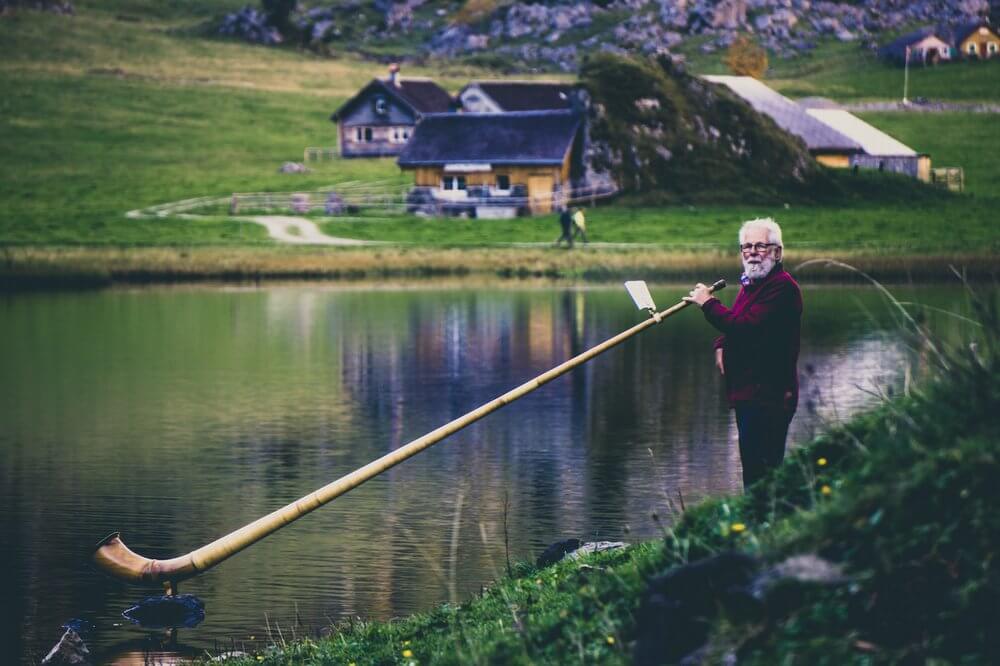 It’s a ten kilometre walk between the summer pastures of Combe de la Biche and the farms of Boéchet, a walk that farmers and their cows make every year on the first Saturday in October. It’s worth the effort, though, as the procession is greeted by a huge festival, with local farmers dressed in colourful traditional costumes and a wide program of entertainment. Participants and guests alike can enjoy a range of food and drink, including hog roast, local wine, fish, sausages and more, accompanied by folk music and dancing.

In the land of Gruyere, it makes sense that the homecoming of the dairy herds is cause for celebration. After four months on the mountains, the dairy farmers prepare themselves in elaborate folk costumes, and decorate their herds with Alpine flowers ready for their return to Charmey. Waiting for them in the village is a lively and loud festival of alp horns, yodelling, flags and a market of local specialties.

Seven families, 200 cows and one UNESCO biosphere make the Entlebuch alpine descent worth watching. A relatively new reawakening of an old tradition, the event has taken place in September since 2003, but it is already one of the largest annually recurring events in the region.

The main spectacle is the parade of flower-bedecked cattle and their traditionally dressed farmers through the village. A festival has grown up around the day, offering visitors the chance to be a part of the tradition with alp horn and yelling displays, and plenty of local produce on offer in the restaurants and bars.

Keeper of the key